Oh, Slithis, if only people understood you. Like Frankenstein's monster and so many rubber creatures that came before it, misunderstanding begets violence and so much unnecessary blood is shed. To be fair, Slithis' penchant for sucking the flesh off of dogs and eventually people probably didn't buy it much sympathy, but this is a creature that never should have been and emerged only due to the ignorance of us foolish humans.

To truly understand the creature is to know its origin which no one in this film seems able to adequately define. Apparently, the mixture of toxic waste into elements in a nearby canal have produced a new substance described by a scientist as "organic as well as inorganic." OK, so that doesn't really help. So tell me doctor, how did this new microscopic organism grow into a murderous succubus akin to Gamera's ugly cousin? No idea? I'll guess we'll just move on. (There is actually a lot of discussion about Slithis though it is all quite meandering. On the plus side, The Thing of Fantastic 4 fame makes a random cameo with a diatribe of science-y words.)

So we have an underwater creature that has tired of feeding on raw fish (I like Japanese too, but not every day) and has taken to stalking this coastal CA town at night for a little variety and the police are bumbling as always as they think a murderous cult is responsible for the dead so just who will save us? Wait, a mild-mannered high school journalism teacher looking for his big break is on the case. Luckily, he is willing to trample evidence at crime scenes, consult his science teacher friend and bribe homeless people with cheap wine to put the Slithis to rest. And faster than you can say, "Wait, isn't this climax awfully similar to Jaws," the credits are rolling and all is right with the world again (as long as you were rooting for the Slithis that is. And I was.)

Odd to think Roger Corman didn't have a hand in this one as it is firmly rooted in everything one would expect from him. The creature is best left to the imagination though we see plenty of Slithis. I did appreciate "Slithis vision" which is nothing more than a fish eye lens, but it is always good fun to get the killer's perspective. And please do pay special attention (not that it could be missed) to the police captain's "talent." He is, without a doubt, the best small town community theater actor I have ever seen. Eyebrow raises all over the place, enunciating like I've never seen and a long, utterly hilarious and baffling scene where he pretends to talk on the phone. I swear they must have told him to play it as if he were hunchback or troll; it is remarkable. Though it is only fair to admit that most of the intimate dialogue amongst characters within Slithis is as unnatural as can be, but this man deserves his own highlight reel. 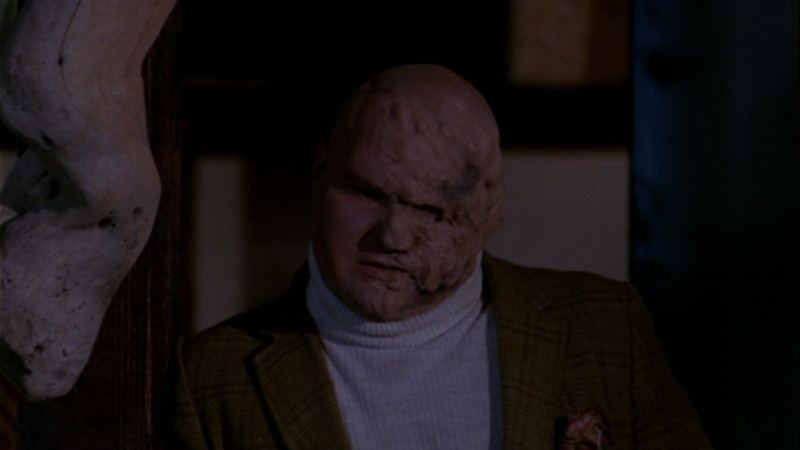 Horror, exploitation and other assorted weirdness. Barely reviewing, occasionally ranting and most importantly, staving off boredom one film at a time.